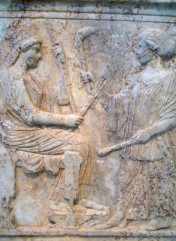 Goddess Demeter was invited by the friends of the king's daughter to the palace. She started working to find comfort after the abduction of Persephone. She was repeating a ritual to make the son of the king Keleos, immortal. One day, his mother, Metaneira entered the room and saw Demeter holds the key over the fire. Metaneira started shouting. Demeter left the palace, she got angry. She ordered Keleos to built a temple in her honour under Eleusis with stone walls and in a high level over Kallichoron Frear. Demeter entered in her place and caused limos, famine. After the return of her daughter, she taught to the Eleusineans, her Mysteries.

The Mysteries of Eleusis took place twice a year. They divided to Small Mysteries (mikra mysteria) and High Mysteries (megala mysteria). Fasting was necessary for all the participants. Some things were forbidden, we don't know the list of those, but pomegranate was forbidden, eggs from birds were forbidden, some fish...
The Mikra Mysteria were performed at Athnesterion (March) at Agra of Athens, close to the river Ilissos. Those mysteries were preparing the participant to move to the Megala Mysteria.
The Megala Mysteria were performed at Boedromion (September). They lasted nine days in rememberance of the wandering of Demeter.
14th of Boedromion: sacrifice to eschara honouring the Goddesses. After they participated to the pomp from Eleusis to Athens. The High Priestess of Demeter hold the Kistis, the sacred box. The High Priestess was leading the pomp to the Acropolis of Athens.
15 of Boedromion: The hierokyrix makes proressis, a declaration of starting the Mysteries of Eleusis. Barbarians and people who were caring miasma could not participate in the Mysteries.
16 of Boedromion: Sacrifice of the little porks in Phalleron of Piraeus. Pork was an animal who destroys the corps. It was a purification ceremony.
17 of Boedromion: Sacrifice to Eleusinion of Athens.
18 of Boedromion: Famous people could come this day to the Mysteries.
19 of Boedromion: The priest of Iachos lead the pomp back to Eleusis and many stops were done in hiera odos to the temples and other sacred spaces. People participated in all those ceremonies very actively and they were travelling on foot with their slaves.
20 and 21 of Boedromion: In Telesterion of Eleusis the Mysteries begun with lectures, theatrical magical acts with visual representations (DROMENA), sacred words were spoken (LEGOMENA) and sacred objects and secrets were shown (DEIKNYMENA).
21 of Boedromion: The part two of this day was only for the initiated of later years. It was another initiation, the final one to the mysteries. The highest part of initiation concluded the EPOPTEIA, a magickal secret with the ear and after life.
22 of Boedromion: Mystai did sacrifices to the deads with plemochoes, special potteries.
23 of Boedromion: The initiated were returning to their houses, reborn and bound with oaths of secrecy. People became happier, more just, and they knew the secret of afterlife.