The word “Hermekate” can be found in Papyri Graecae Magicae III. 1-59 and the explanation that is provided by some is that “Hermes and Hekate are perhaps a “natural match,” in any case, due to their similar functions and associations, though their mythology does not often overlap” or that “Hermekate is son of Hekate and Hermes”. Yet any other sources other than PGM can not be found. In Betz's book it is written "the name Hermekate is a combination of Hermes and Hekate".

It is known that Hermes invented literature, music, palaestra and geometry. Το honor him people created a square statue of him with no hands and feet. They were putting them on the roads, on crossroads, in front of temples and in the houses. These square statues have the name “Hermas” (Ερμάς). Later they created square statues (hermas) for other Gods and each statue according to the God that was depicted took the name from the synthetics “hermas” + “God's name”. So if on the hermi it was Athena tha statue would called “hermas” + “Athena” = Hermathena. If it was Apollo it would be “hermas” + “Apollo” = Hermapollo. If it was Hekate it would be “hermas” + “Hekate” = Hermekate. So hermekate is called the square plaque that depicts Hekate and it is an explanation about why there are no sources available for that matter. 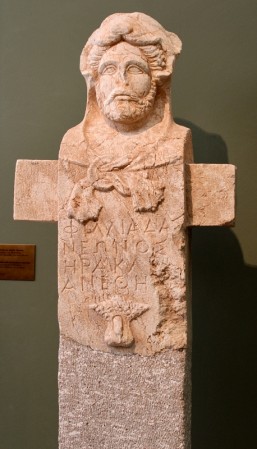