The Prince Erysichthon and the Goddess Demeter

From the Hymn to Demeter of Kallimachos we will see how the Goddess managed the disrepsectuf young prince Erysichthon and what was his ending.

Kallimachos was born in Kyrene in 305 b.C. and he died in Alexandria in 240 b.C. His father was a general. When he was young he lived in Alexandreia, the most important city of philosophy. His teachers were Aratos and Hermocrates. He found a job in the famous library of Alexandreia and he nearly reached the headmaster position. He was a prominent author of reviews and studies. He wrote Pinakes (indexes), a monumental book with all the spiritual treasures that were written in the library. He read and knew a lot of books by heart. In his poetic writings we find Aitia, Epigrammata, Ekale, Iamboi, Hymns etc.

The Hymns consisted by small and to the point phrases. They are not religious but they are more close to the literature, they are artistic with lot of compressed knowledge.

I want to share a small part of the Hymn to Artemis:

"How many times o Goddess you tested your silver bow. First to an elm, next to an oak, thirdly to an animal and after that not to an old animal, but to a town with unjust people, to foreigners who were also unjust, your wrath was fearful."

The Hymn to Demeter

In the hymn at Dodio of Knidia in Thessaly, the Pelasgoi (ancient hellenic tribe) build a sacred place to honor the Goddess Demeter. They devoted to her a fertile forest full of trees. This sacred place was similar to the places She had in Eleusis, in Triopas and in Euna. The forest was a great place for the Goddess to rest under the trees and next to the running waters. Nymphs also lived in the forest.

One day, as the civilization of the town was in low level, the prince took 20 men to cut the trees of the sacred forest in order to make a dining table and a new room in his palace, a room of celebrations. The disrespectful men cut also a very special tree, a place of the nymphs, so one of them screamed out of pain and Demeter came immediately. She was transformed to priestess Nikeppe and with garlands of flowers and a key in her shoulder approached the prince. 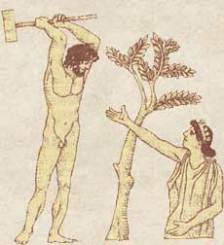 -My child, you who cut the threes, the devoted to the Gods, please calm down my child, you who are beloved to your parents, take your assistants and stop before the respectful Demeter gets angry.

Well, Demeter was very kind, and as a chthonic Goddess She knew what to say. She is also a kind mother to all people. The prince Erysichthon told her that he will take the axe and cut her if she will not leave and with this wood he will make furniture and a new roof.

The Goddess transformed to Her real form. Her feet touched the earth and Her head was up in the highest level of the sky. The assistansts and the young prince almost died out of fear. She told them

-Yes dog dog make that roof and organize celebrations. Later your parties will be not so often.

Demeter made Erysichthon to be hungry all the time (limos). He was eating for 20 people. The cooks left him, he ate the farming animals, the plants, he was eating everything. Noone was inviting him in celebrations, because Dionysos was mad to him too. After eating all he could, everything he owned, he was visiting the three-ways crossroads (triodoi) and the was begging for food. He was also eating the Hekate's deipna (suppers)! In the end he died eating himself.