Recently Hekate lead me to the work "About Statues" of the neo-platonic philosopher Porphyry. I was meeting him, many times in references of ancient texts and modern studies. I was impressed when I started to read about him and about his teacher, Plotinos. The philosophical school of neoplatonism seems very interesting for a witch, especially for platonics. In this article we will see how Porphyry is decoding the names and the properties of Gods.

Porphyry was born in Tyros of Phoenike from a rich family. His name was Malchis but his teacher Kassios Logginos changed it to Porphyry, because his words were royal. He was characterized as a very wise man with knowledge of many matters. After staying with Kassios in Athens (platonist) he went to the school of Plotinos, in Rome, in which he became the best student (neoplatonism). Plotinos and Porpyry or Porphyrios in hellenic formed the teaching of neoplatonism in a great degree. A notable work was the Enneads where the teachings of Plotinos were presented in a short but analytic way. This work is the base of neoplatonism from its age until today.

Porphyrios was also a vegetarian, a witch and a philosopher, as his teacher. He tried to connect the teachings of the school of Aristoteles and the school of Plato and he adopted the theological ideas of Plotinos. He combined the Chaldean Oracles with neoplatonism very successfully. He considered theury as important as philosophy in the salvation of the soul, but he practiced philosophy more. Those ideas are too important for any witch today, especially for devotees of Hekate, because in the Chaldean Oracles, Hekate has a greater role and this theology presented has teachings of the mysteries, of platonism, pythagorism, neoplatonism and anatolic elements... A well known teaching of Witchcraft that the soul can be detached from matter through the lessons it takes during incarnations is a part of Porphyrius philosophy. Porphyry affected other philosophers like Iamblichos until the Byzantine Emperors... who burned his books but they also studied them personally.

This book was written in Athens as Porphyrios was a student of Kassios Logginos. He tried to decipher the forms of the statues. In this work about the statues Porphyrios is presenting the gods as names of energies. In hellenic, statue is not something that stands, but somethings that causes the heart to sense peace or a part of it. So, the heart and the statue are connected. According to the platonic teachings, people built statues because the have a divine part inside of them in their soul, that's why the feel that need to create something equal to honor the gods who gave them that immortal part-soul.

Let's see some basics before we go to the decipherment. Hellenes gave the form of humans in gods' statues because human is the perfect creature of God in the earth. They used gold, silver, parian marble, crystals due to their clarity and brightness, because gods are ligh and live in the aether fire. According to Orphics and later to the "official" religion of Hellas Zeus is the cosmic mind, Nous, who created the world, the god of the gods, who creates by thinking of something. He is sitting because his power is solid. He holds a sceptre with his leaft hand because he rules according to compassion (left part=heart). He is half naked from the top because he can be seen to the mind areas of the world. He holds an eagle or Nike because he is always victorious. With the same motive, Porphyrios is presenting the other main Gods.

For example, Hera is the aether. The air of the area under the moon is Leto, which is the aunt of Hekate. Porphyry writes that Leto is combined with the word letho (to forget). During sleep the senses don't work and the souls when they move to the area under the moon they stop to remember. Is this a reference to astral projection? Porphyry writes that Leto is the mother of Apollo and Artemis (cousins of Hekate) because they bring light to the night. Proclus commenting Plato's dialogue Kratylos writes that "Leto is giving the life-giving light to the mental essenses of gods and the phychic worlds. Leto is bringing the cosmic light and this is the reason that her children give the life-giving light. Also, Leto is moving the souls to perfection of virtue and to the lightening end which is moving them to the mental aeria of the father, taking them away from the weird paths of mate, from the multicomposed badness and from the harshness of the world of genesis... The theologists called her Leto, as I thing, because she gives to the souls the smooth and soft character, the source of willing life with the gift of divine happiness. So, we can say that Leto is not the one who welcomed Apollo, but the mother of lifegiving light, which it keeps everything with warmth and Apollo is also special, he is the bringer of harmonious life in its sum and all the words of the world."

"Hestia is the ruling element of earth power...Rhea the power of mountainous land. Demeter of the fertile land... Kore of Zeus is the offspring that comes out of dried seeds. That's why her statue is crowned wih wheat and around her are poppies, the symbol of fertility... Pluton is the sun under the earth... The power that produces shell fruits and all the fruits of plants is Dionysus. 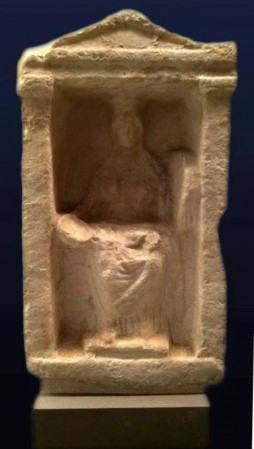 Dog or kyon in hellenic is connected with kyese, the procedure of giving birth. "The dog who is declaring the birth of fruits, in which that birth has three phases: planting, rooting and growing buds." The dog was depicted with Pluto, so Porphyry is deciphering this association: "Pluto is taking part of the kyese when he grabs the Kore". He means that as Pluto moves under the earth the rooting proccess and the planting can happen, so that the seed will grow buds (Persephone). Also, the hiding of the sun (Pluto) is important to make the seed become alive again. The dog is a common symbol here which is showing a process.

"Kerberos has three heads because the positions of sun over the earth are also three: raising, middle of the sky, fall.

"Attis and Adonis are related withe the series of fruits. Attis is connected with the flowers that give buds in the spring but fall prematurely. Adonis symbolizes the cutting of well matured fruits... Seilinos is the power of the movin air who brings many goods to everything... The oracular gift is called Themis.. The spermatophore words is Priapos... The power which creates oceans is Okeanos and the symbol is Tethys... The fresh waters are called Acheloos and the sea waters Poseidon... the female goddess who gave birth (in the sea) is called Amphitrite. Powers of the fresh waters were called Nymphes and in the sea Nereides. The power of fire was called Hephestus... Sun was called Hercules due to his property to banish evil from the earth... The twelve contests were the twelve zodiacs." 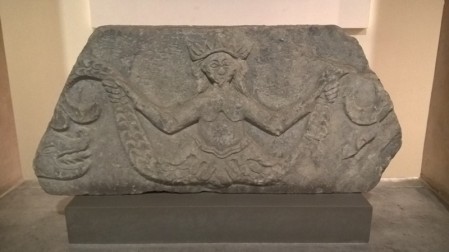 Sea Goddess from the Benaki Museum of Athens

"The healing power is Asclepios... The snake who is enwrapping around his stag means the salvation of body and soul. This animal is very spiritual and it banishes the body illness. It is also considered to be medicinal, because it found the herb for good vision and resurrection."

"Selene was called from selas (glare), and Artemis was called because she intesects the air. Artemis, though she is a virgin was called lying-in because the power of the new moon is having a role in labor... Selene also called Hekate for the phases she passes and changes her power according to them. So Selene has three forms:

Someone could understand from the branch of laurel her fiery nature (because when you burn a laurel leaf the noise that it makes is fiery, as the nature of this plant is also fiery) and from the poppy her fertility and the amount of souls who are going to inhabit to her, like a town, due to that poppy is also symbolizing the town."

"Eileithyia is also a symbol of birth power... The fates have also her powers. Klotho is the birth power, Lachesis is the feeding power, Atropos is the unchangeable will of God. Among them Demeter is placed, who is the power who gives life to fruits... Kronos is associated with time. Kouretes are symbols of seasons... Ares symbols is wars and bloodshed... Aphrodite has the power to give birth, she is the reason for making children... Hermes is word... Hermes is also the spermatic word. The mixed word who by sun is Hermes, by selene is Hekate and for the universe is Hermopan... The symbol of the universe is Pan. He has horns that are the sun and the moon and skin of deer which is the stars or the multiforms of the universe.+" 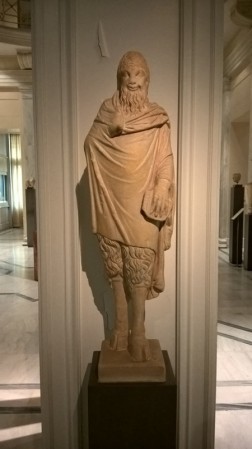 God Pan from the Benaki Museum of Athens