« Ancient Hellenic Language vs Modern Hellenic - The Beauty and the Gods »

Zenon and Epictetus on Piety

In the following article we will see how two main Stoic philosophers saw piety on Gods. From the blog we have also seen the opinions of Theophrastus and Plutarch on that subject.

Hellenistic Era (Ελληνιστική Εποχή) begins with the death of Alexander the Great at 323 b.C. and ends with the victory of Octavian versus Marcus Antonius at Actium at 31 b.C. As Hellenism was spread throughout the world, new ideas were exchanged, new customs, new ways of agriculture, new religious habits. The town-country lost gradually its identity from tradition to new world ideas. The world was changing too fast, people moved from their cities, they prepared for war or to make long journeys. Trade through land and sea, exchange of goods and agriculture made available of new things and ways to get money. On that time of rapid change, the philosophical schools of Plato and Aristotle lost their interest by many people, who turned to new ways of non such difficult philosophy. Three schools prevailed, the Stoicism (Στωικισμός), Skepticism (Σκεπτικισμός) and Epicureanism (Επικουρισμός). For the three of them, the most famous was Stoicism which was expanded to Rome at the Roman period and then to Neoplatonism and Christianity. Stoicism incorporated as a basis the Cynism (Κυνισμός) and they added Platonism (Πλατωνισμός) along with the new ideas of Zenon (Ζήνων) from Kition of Cyprus, the founder of the school and his disciples.

Stoics followed the division of Philosophy expressed by Xenocrates (Ξενοκράτης), headmaster of Plato’s Academeia. Those are: Logic, Physics and Ethics. The study of the Gods, theology, belonged to Physics. In the following two small excerpts we will see how Zenon of the old Stoa and Epictetus (Επίκτητος) of the later Stoa, taught their students on piety.

Before that, we should mention how Stoics saw God, oh yes, God. It is not a mistake. God for the Stoics is the ruler, the general the one who is in everything and sees everything. God is an immortal being, a perfect being, a happy being, who takes care of the world. He has not the form of a human being. He is the father of every part of the universe and he permeates every part. Stoics believe three are the principles which rule the world: Zeus, Physis (nature), Eimarmene (destiny) (Ζευς, Φύσις, Ειμαρμένη). Stoics respect Gods and they teach if you invoke the gods, celebrate or pray to them you are not making any favor, you make a favor to yourself. Many times, we see the Stoics attribute to the Gods, the forces of nature or the cosmic forces, not seeing the Gods are it was used to. They provided an alternative view of religion and Gods, a more scientific.

“They (Stoic philosophers) say that virtuous men are same with God. Because they have God inside of them. On the other hand, the fool is an atheist. Atheism has two meanings: to act as to disrespect of the Gods, to totally overlook the divine. On the last the meaning, atheism does not apply in every fool.

Virtuous men, respect God. Because they have experience in rituals for Gods, because piety is the science of serving the Gods. To that, they will do sacrifices to them, they will keep themselves pure. Because they avoid any action that will disappoint Gods, and so Gods, appreciate them. Because, they are holy and just regarding Gods. Only the wise are priests. Because, the have studied all about sacrifices, founding temples, purifications and all other matters relative with Gods.” (Diogenes Laertius, Zenon 119) 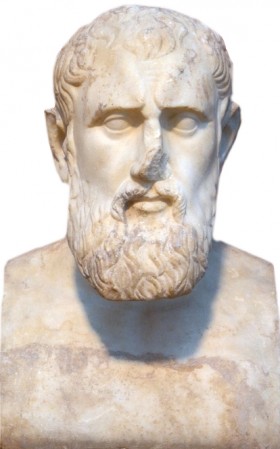 “Know that the main thing regarding piety on Gods is that: to have the correct opinions on them. (This is something we read also in Plutarch.) This means that they exist and they govern the universe nice and fair. (A basic belief of Stoicism is that divine providence governs the universe.) Discipline yourself on that: to accept them and everything that happens, and with your will, follow those things, like they happen from a perfect intelligence. By that way, you won’t be blamed by the Gods neither they will call you as a careless. …If you conceive as good or bad that depends on us, you will blame by them and you are going to hate them as they were the cause, if you fail to succeed. By its nature, every living thing tends to avoid and go far away to anything that seems to be hurtful and from their causes, and it accepts and respects the causes of the useful things and the things themselves. So, it is out of the question for someone who thinks that it is harmed and to be happy with something that he thinks he hurts hum, as it is impossible to be happy with the bad thing…. And that’s why the farmer mocks Gods, the sailor, the salesman, those who lose their wives and children, because when there is profit/advantage, there it lies piety. So, if someone takes good care, as it should, the wish and the remotion, at the same time, he takes care of piety. (He means that we should not base our piety on our best interest in matter/malkuth/earthy world.) In any case, he should do offerings to the Gods and sacrifices and give the first things, according to the home customs with cleanness, without boredom, not to forget, not to give less from what he can give.” (Epictetus, Manual 31)

“If we were clever we would do something else, publically or privately. We would praise and say hymns for the divine. Shouldn’t we, in tillage, in harvest, while eating, to chant our hymn to the God? The God is great/big, because he gave us the tools which allow us to work with the land. God is great because he gave us lands, throat, belly, because he allowed us to grow without realizing it, and breathe and sleep. This is the hymn we should chant in every opportunity. (He means the previous sentence)… And as I have been blessed with logic, I should praise God.” Epictetus Discourses I,16