Anyone who is unfair to humans cannot respect God. -Porphyry 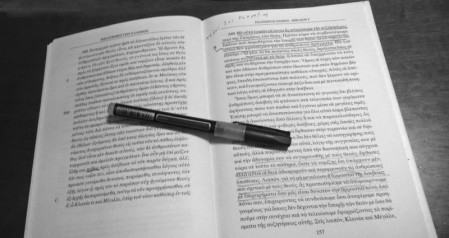 As we have written again on piety, from different ancient Hellenes writers, we will continue that tradition today, by presenting a taste of platonic theology, through the book Laws, which is the last dialogue of Plato. It consists of 12 books and an additional one. In the tenth book we read about three major crimes, which are three cases of disrespect against the gods. The first case is that gods do not exist. The second case is that gods don't care about humane problems. The third case is that humans can bribe the gods with offerings so that they won't be harsh on his unjust actions. Those ideas are crimes against gods and Plato is proving that ignorance is the cause of them. He also proves why those three ideas are wrong. In the article we will see a synopsis of the tenth book, centering aroung piety.

We have presented opinions of Zenon and Epictetus in the blog, but we hadn’t written anything on Stoic Philosophy, this great school of antiquity. We don’t often see Philosophy in blogs about Hekate and even in blogs with a broader range of the subject of Witchcraft and Magick. In “A Witch Alone at the Crossroads” we consider Philosophy as a basic factor for understanding the cult and the mysteries of the Goddess. There is no way that can be achieved an appropriate understanding of Neoplatonism and of the Chaldean Oracles, without an understanding of the basic teachings of the systems which influenced them.

In ancient Hellas, Philosophy’s upper part was theology and it asked much influence in the religion. So, why not?

This is an extended article that I am writing before the dark moon of September as an offering to the Goddess Hekate Chthonia. I am going to present some basic information about the ancient hellenic necromancy and then a presentation of one of the four biggest death oracles in the ancient world will be presented. Averno is closely associated with Hekate and Persephone. So, our Goddess lived there and She was very active bringing the dead back to life.

One of the most well-known symbols of Goddess Hekate is the torch. Other goddesses and gods have as symbol the torch. Let's see who they are.

Erinnyes or Evmenides are considered to be daughters of Persephone and Plouton or Ether and Gaia or Gaia and Skotos or Night alone. Erinnyes are called when they are on earth and Evmenides when they are on Hades. They were three in number: Alekto, Tisifone and Megaira. They were leaving next to the entrance of Tartaros. They were avenging and revengeful goddesses. They were tough, rigid and adamant. It was their responsibility to bring the dead to Tartaros and punish them by hitting them with lashes or burning them with torches. The lashes were snakes.

They were not staying only in Tartaros but they were traveling to Olympus as well and they were standing next to the throne of Zeus waiting for commands about who evil-doers to punish. After that they were walking all over the earth searching and examining for all the criminals and villain and then they were bothering them hard so that these people could not stand, rest, drink or eat.

When Gods wanted to punish people with wars or diseases they were asking Furies to accomplish this task. Alekto was bringing up the wars, Tisifone the diseases and Megaira death.

They were representing them as wild women having snakes on their heads instead of hair and wearing crowns from snakes. They were wearing long, dark colored dresses. They were holding on the one hand torches and on the on the other hand snakes. In other representations they are on the one hand keys and on the other stick or lashes and sword. Behind them Fovos (=fear), Tromos (=dread) and Mania were following.